Baby Antelope, Hyenas, Python – Video of hyena stealing python’s bait ✅ Discovering that the python was about to eat antelope, the hyena quickly ran to fight for the robbery, persistently forcing the python to let go of its prey. ✅ IMPALA BABY TRIES ESCAPING PYTHON & HYENA 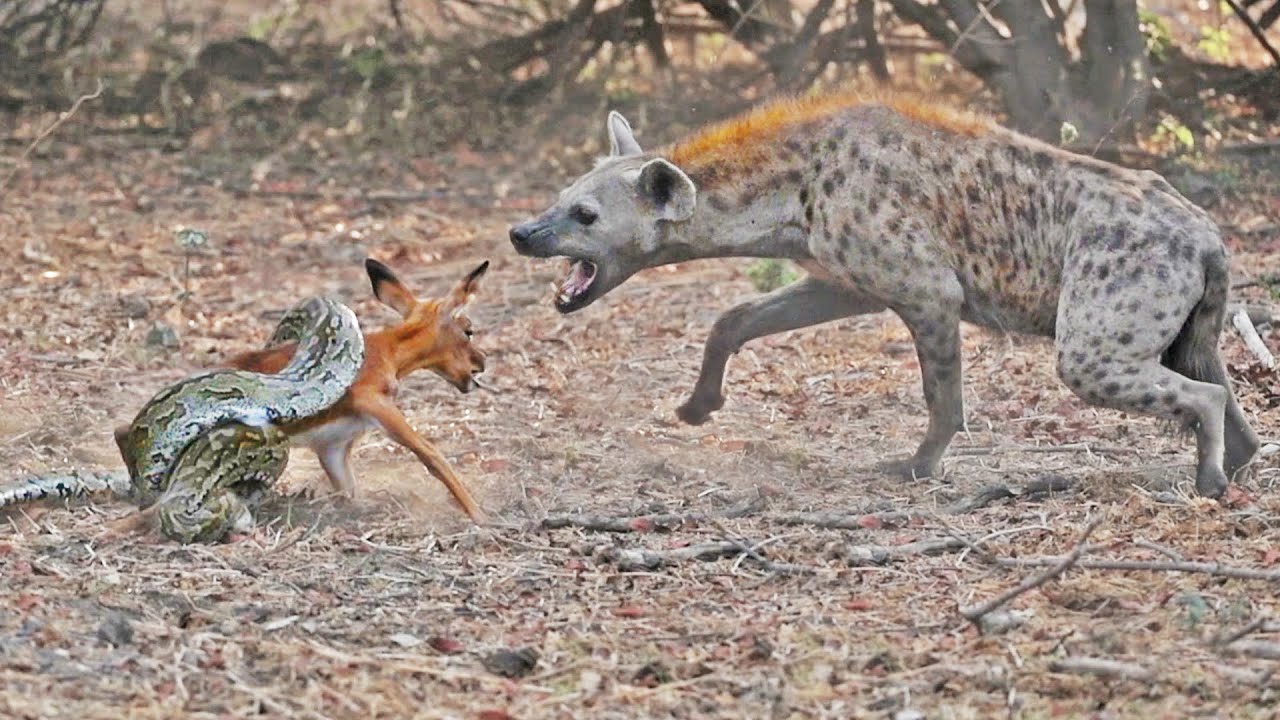 Mike Sutherland filmed the battle for prey between hyenas and pythons during a tour in the Okavango Delta, Botswana, Latest Sightings reported on January 4. “We drove around in the morning, during a time when many animals like boars, impalas and wildebeest had young. During the trip, we saw a lot of baby impalas, some of them. A few days old, others just a few hours born,” he said.

There was a large herd of antelope hanging around the edge of the mudflat and a hyena roaming in the distance, according to Sutherland. A python slithered down from a large fruit-filled brocade tree and camouflaged itself among the dry leaves. The baby antelope walked right over to where the python lay and was caught in the blink of an eye. “We heard the antelope call so we turned in that direction to see what happened. The hyena did the same,” Sutherland said.

The python grabs the antelope’s leg and immediately begins to wrap around its prey to squeeze. Their interaction caught the attention of hyenas. The animal quickly ran to take advantage of the opportunity. Initially, it tried to grab and pull the antelope out of the python’s grip but failed.

The hyena is very patient, trying to bite the python to force it to let go. The latter grabbed both pythons and antelopes and carried them about 10-15 meters before releasing them. The hyena continued to harass the python, causing the python to eventually give in and give up. The python hissed one last time and then crept toward the bushes. The hyena quickly devours its prey while the mother gazelle looks on painfully.

“We were all fascinated by what happened, feeling quite confused and shocked. The important thing is not to interfere with nature. It will still be the same even if we are there to Observe it or not. This is an extremely rare sight. For the first time in 12 years as a guide in Africa, I have witnessed something like this, “said Sutherland.

The impala (Aepyceros melampus) is a medium-sized antelope that inhabits the grasslands and open forests of eastern and southern Africa. They are the prey of many animals such as lions, leopards, hyenas and African wild dogs. Living in groups gives them a better defense against predators.

This is the incredible moment an impala lamb was hunted and caught by a python and then stolen by an opportunistic hyena.
Send in your wildlife video here, and earn money: https://www.latestsightings.com/partn…

While watching a cute impala lamb, the events that followed had these safari goers in shock.

This unexpected sighting was captured by 34-year-old founder of Escape Safari Co, Mike Sutherland, while on a private game drive in Mombo Camp, Okavango Delta, Botswana.

Mike tells LatestSightings.com the story: “We were on a morning game drive during the time of year when many animals like warthogs, impala and wildebeest have babies. As we drove around we saw loads of baby impala, some days old and others just hours. The bush was alive!”

“There was a large herd of impala on the edge of the dry floodplain and a hyena walking in the distance. A python had slithered down from a large, fruited Bushwillow tree and camouflaged itself in the leaf litter. One unlucky young lamb stepped right over the snake and, in a flash, it had been caught. We heard the lamb bleating, a call of distress and we turned swiftly in that direction to see what had happened, the hyena did the same.”

“The python had its jaws around the leg of the impala and immediately began to constrict the impala lamb. Coiling its strong body around the young animal as it squeezed the life out of it. This interaction caught the attention of the hyena which then came hurtling in to take advantage of the scene. Initially, it tried to grip the impala from the python but, with no luck, and then a game of cat and mouse started.”

“The hyena was patient, trying to bite at the python to force it to let go, but eventually it decided to pick up both the python and impala in its jaws and carried its bounty 10 or 15 meters before dropping them. Some more harassment led to the python succumbing to the pressure from the hyena and it eventually gave up, giving one last hiss and then slithered back to the safety of the trees. The hyena devoured the impala lamb in minutes as the mother impala looked on in agony.”

“We were all intrigued by what was happening, and we all felt quite distraught and in shock by the scenes that unfolded. It took some explaining and guiding to get the guests to understand fully the fact that nature can be cruel but also has strange ways that we can learn from it. Not everything we read in books is set in stone, and this was a great example of how one needs to be open-minded in the bush.”

“It is important to not interfere with nature and although it may be tough to watch, the events would have played out the same way whether we were there to witness it or not. This was an extremely rare sighting and the first time in 12 years of guiding across Africa that I had witnessed something like this!”

BOOK YOUR TRIP TO KRUGER: http://bit.ly/BookatKruger

To license the footage:
Contact@LatestSightings.com

Get some of our exclusive specials at the Kruger National Park (Free nights):
https://www.latestsightings.com/specials

For live wildlife sightings in the Kruger National Park: http://www.latestsightings.com/